Today, I found myself done with my official work as well as all the housework and prepping my three son’s homeschool work for the week.  I looked at the clock and I had 45 minutes before we had to leave for baseball practice.   It seemed like a miracle! Even though we had done ‘school’ for the day with my 3 year old, I decided to do something I’ve been meaning to do for a few weeks with him – make play dough out of marshmallows.  Yes, that’s right!  I love Pinterest for all the cool ideas other moms have shared.  When I saw this pin, I knew Cole would absolutely LOVE to make dough this way.  I won’t put the instructions here – just head over to Growing a Jeweled Rose as she is the one who figured out this cool technique.  It’s pretty easy and you just need marshmallows, corn starch, oil and food coloring (if you want it colored). 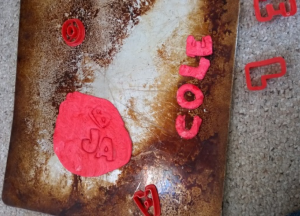 My 3 year old LOVE, counting out the marshmallows, then adding the corn starch.  You needed to use 2 tablespoons, but as I usually do, only brought out the teaspoon and told him that 3 teaspoons is the same as a tablespoon so we would need 6 teaspoons.  His immediate response was – that’s the same amount as marshmallows!  The whole process to make the dough took about 5 minutes, which included him looking at the video that he asked me to make.  It wasn’t a lot of dough and not the same consistency as dough made with flour but I thought it would be excellent rolled out, and it was great for that.  We rolled it out and used our letter and number cookie-cutters to make his name along with random letters. 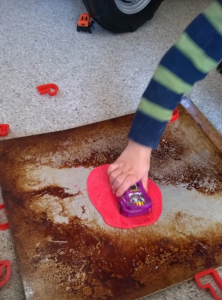 Once we had fun cutting out letters and numbers (which for him was about 5 minutes), he ran over and got one of his trucks and said, “Can we see if the tires makes tracks on the marshmallow dough?”  Absolutely!  So for the next 5 minutes, he got several of his vehicles out to see how each of their tires would track.  He discovered on his own that the vehicles that had light tires with small axels (i.e., the ones we purchased at a dollar store) hardly made any tracks at all, while the ones that you pull back and they go forward made the deepest tracks.

The whole process – from making the dough, to doing reading and science AND clean up time – took less than 30 minutes but he was so engaged in everything we did.  I’m so glad to have remembered this project. 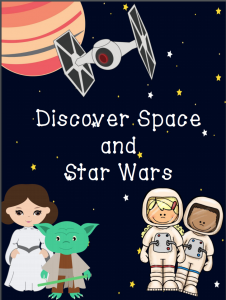