For those of you who either tried or wanted to try Bunny Town, here’s another complicated play area.  It took a lot of time, less time than my first venture in felt play areas because now I’m getting better, but probably more than was needed as Cole kept wanting me to add ‘features’.  He still wants me to add some more, so I’ll be putting in at least another mountain and volcano.  Please note, you don’t have to follow anything I did.  I researched on Pinterest, and had Cole pick the features he wanted. However, read or jump to the end to see how I used this to teach him reading.

What you will need:

The first thing I did was to make the beach by cutting out dark blue felt to glue to the end of one corner.  I then cut cream-colored felt for the beach and small white crescents for the waves.  After that, I made a river by cutting strips of aqua felt and gluing them on a little at a time.  To make the curves in the river, I would glue the end of the felt strip, then cut the width of the strip almost, but not quite, all the way through I would then put a little glue and rotate the felt into a curved pattern.  The ‘river’ you see here used an entire felt sheet cut into wavy (so it looked natural instead of strait riverbanks) strips of about 2 inches wide. 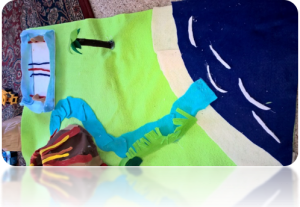 Next, I made the Cole’s favorite part – the volcano!   I did this by cutting out brown strips in a trapezoid shape and gluing the sides together.  This allowed me to keep the top open so the dinosaurs can play inside.  I used 2 shades of brown here as I only had 1 sheet of each color and 1 sheet wasn’t enough.  After I glued the volcano together Cole wanted lava coming out, so I cut out strips of red, orange and yellow and glued them into the inside top of the volcano.  Some I glue to the outside too, but many are loose so the dinosaurs can play under the lava.  The creativity of boys minds will never cease to amaze me!

After the volcano, Cole wanted another one but I didn’t have any brown left so I suggested a mountain for the dinosaurs to play in as well.  I made the mountain out of gray felt but this time I made more of a curved triangles for the pieces because I wanted a closed top.  I did make a cave opening, which went over the small lake I made at the end of the rivers.

We, apparently, needed more hiding spots for his dinosaurs so I made some caves.  There is a pattern for these, which are meant to be sewed, at Crafters but I wasn’t able to print it out so I did my best by making 2 big curved pieces then replicated that so it would be thick enough to stand up.  I did different colors inside and out because I didn’t have enough of 1 color.  One cave is yellow and pink, while the one pictured below is red and green.  I let Cole pick the colors from the felt I had left.   The red/green cave also has ‘vines’ hanging down from the top, which I made by just cutting small strips of green and gluing them on.

Next, I made a ‘tar pit’ which is basically a circle of brown with a slit in the middle for the dinosaurs to sink into.  You can also see the yellow/pink cave in this picture.  The herbivores needed something to eat so I made lots of ‘bushes’ and ‘ferns’ by cutting strips of green and then making cuts that go a little more than ½ way through the strip.  I just glued the bottom on.  These were the easiest to make of the whole project.  Next came the trees, and these were the most difficult for me.  I cut strips of brown and then put a lot of glue and rolled them to get the trunks.  I would cut a strip the width of the felt piece then cut it in half.  I think I should have made the trunks thicker, as they do tend to fall down.  Next, I cut the leaves out of 3 colors of green (just because I had 3 colors left by this point) and I glued each leaf to the top. 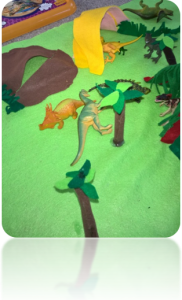 The last part, so far, of this project was the ice hockey rink.  Because, you know, dinosaurs LOVED to play ice hockey back in the day.  For some reason, I couldn’t find a pattern anywhere online to make a felt ice hockey rink so this is my own design.  I started with a rectangle area of white then glued light blue strips to the sides to replicate the glass protection barriers.  Once I did that, I glued the edges together – like you would if you were wrapping a gift – this made the side stand up.  Finally, I added the red and blue strip and the hockey goals.

We have played for hours with this project, so it was definitely worth it for my son.  One of the things we have done is to learn to read.  I made 2 piles of cards, one with dinosaur names and the other with places on the play mat.  I turn the cards upside down and we randomly pick a card from each pile and put the correct dinosaur where they are supposed to be.  We have also incorporated Bunny Town and the dinosaurs have enjoyed going on Easter Egg hunts and counting the eggs to make sure they have all of them.  We included foreign language into our lessons by making cards with Spanish colors and hid the bunny with the color name. 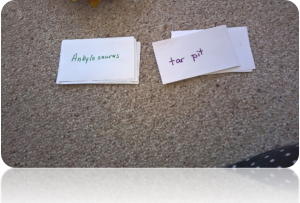 If you make this, please send pictures!  I would love to see what touches you did to make this project special for your children!