For those of you who have lots of time AND crafting skills, here’s a really fun Easter project.  This project is NOT meant for little ones to help, although that is, obviously, up to you.  It is the most complex crafts that I have done ever but, boy, do I feel proud of it once I was done.  I saw the idea for this project from Fun at Home with Kids but I modified it a bit for Cole.   We are going to add a basketball court and some more things for the bunnies to play with along with hiding the eggs.

What you will need:

The first thing I did was to cut out the eggs and numbers.  Mainly, this was first, as I was waiting for my older sons to get done at baseball practice so I decided to start cutting then and I wanted to finish this part.  There was no actual reason this step must be first. I then glued the numbers to the eggs.  I did 22 eggs from 0-22 but that’s just because Cole wanted more and more eggs cut and I wasn’t paying attention to how many I had!  This part was the hardest and took over an hour to do.  I let Cole pick the colors combination of the numbers/eggs.  You could always not put the numbers on, but I felt that it was worth it to include math in a fun way. I also made a basket for the eggs but taking an approximate 2-inch piece of felt and gluing the ends to make an oval.  I then glue a piece of felt to the bottom and made a handle by taking chenille sticks and putting the through a hole at the top. 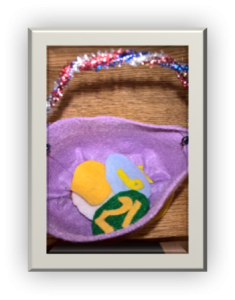 I then folded over the felt and glued it on 3 sides.  I cut semi-circular shapes the size of the eggs all around the base, being careful not to cut throw the 2nd sheet.

Then I made the carrots for the bunnies’ garden.  I just cut out some orange pieces that looked like carrots and the green tops then glued them together. 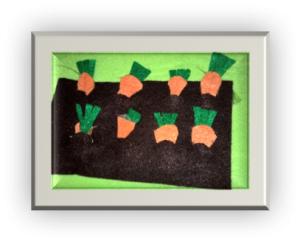 Then came time for the bunnies.  There wasn’t any direction on the other site, so what I did was took a pen and drew the shape of the bunny, then cut 2 of them.  I then used hot glue to glue all but the bottom and a little bit up the side.  I stuffed the bunnies with small pieces of scrapes and then hot glued a strip of felt to the bottom.  I then hot glued on the ears, eyes and tail. 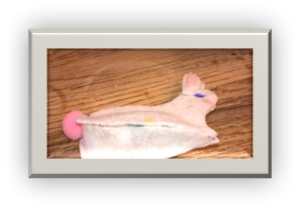 The bunny house was next.  This part was hard to figure out.  I glued a long strip for the front, then folded the felt up to get a crease.  I then laid it back down, and put a smaller piece for the side and glued those together.  I continued until I had all 4 sides.  I added a roof (not shown) and glued green pom-poms for bushes. 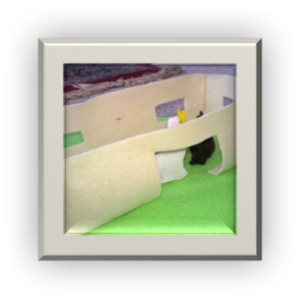 Finally, I glued on a pond, and baseball field as my older sons thought it would be fun to add that to the game.

If you make this, please send pictures!  I would love to see what touches you did to make this project special for your children!