How much time do your children REALLY spend with their phone, video games, tablets, and computers?   Are those devices more of a parent to your children then you are?  The American Academy of Pediatrics suggests limited screen time to 1-2 hours total per day.  However, according to a study by the Kaiser Family Foundation in 2010, the average time teens spend with these devices is more than 7.5 hours a day – EVERY DAY, that means your child will spend 53 hours EVERY WEEK – more than a full time job – with their electronic devices.  That is 2,730 hours this year alone.  How much of that time is productive?  How much of that time is used to make your child into a better, more caring person?  How much of that time is used to increase your child’s intelligence?  In my experience, any positive amount is sadly very small – if any of it at all. It breaks my heart and I worry not only about our children now, but about our grandchildren. I know that our parents probably said that about us, and their parents before them, but the trend for children these days is so bad – and it is actually worse than you think.  Let’s break down all the problems your children can be experiencing because of our current technology. 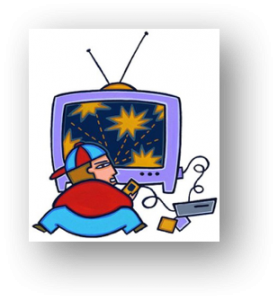 The news is constantly talking about the rise of children who are obese in our country and the problems that it will cause. A big part of the problem is all the media that children are consuming.  Very few types of media encourage any time of movement.  People are also apt to eat unhealthy, snack-type foods as they are sitting and staring at a screen.  My oldest son who is 16 told me the other day when we were talking about this topic, that of course there is an obesity problem with people who spend their day doing those things-  it is so easy to sit and watch videos or play video games because you don’t get tired and time just passes.  It’s not like when he goes out and shoots baskets or throws a ball around with his brothers.  You can just sit all day looking at the screen and not get tired.

Most people don’t realize that media, especially video games, can be addicting.  However, it affects up to 20% of people, especially boys.  While video games and other computer activities do not have a physical addiction like drugs or alcohol, they do have a psychological affect according to WebMD and that people who are addicted like “knowing ‘I can escape or feel good about my life.'”

A problem that you may not be willing to face is online safety.  According to Symantec, over 62% of children have had a negative experience online, with 39% being a SERIOUS negative experience, such as receiving inappropriate pictures, being bullied, or becoming a victim of cybercrime.  However, less than 20% of parents realize that this problem is even happening.

Another problem parents don’t realize until it is too late is financial trouble.  More than 30% of children who are online have used their parent’s credit cards without permission according to a study performed by Symantec.  Of the rest of the children who have been allowed to use their parent’s credit card, 23% overspent and 53% of these children then purchased items at a later date that they were not allowed to get.

An obvious problem with using media for gaming and socializing is lower academic performance.  For every minute a student is distracted by cat memes or videos where people are acting (or actually being) stupid a minute is lost on educational activities.  According to Health News and Views, 47% of children are heavy media users only have fair to poor academic grades, while 23% of students who only spend a few hours a day on media earn fair to poor grades. As stated above, 7.5 hours every day are spent by children on media and you may be wondering how much is productive and how much is wasteful.  While there hasn’t been a conclusive study on that fact, Health News reports that due to multi-tasking, the amount of media consumed is actually much higher than the 7.5 hours.  When they break down the media usage, there is not much time for any educational activities:  4.5 hours are spent watching television shows, 2.5 hours are spent listening to music, 1.5 hours are spent on computer, 1.5 hours are spent texting, 1.25 hours playing video games, and just 38 minutes spent READING.  Just with children who play video games, and not all the other media that many students have, will spend 30% less time reading and 34% less time doing homework then their counterparts that do not play video games according to Parenting Science.

We are all aware, on some level, that violence begets violence, and the media most of our children see these days is overwhelmingly violent.  A brand-new study released August 2015 proves what we all know that “There’s a definite link to increased aggression in children who play violent video games.”  However, the study then goes on to say that while children have more aggression, it is unknown if that leads to criminal behavior.  For me, the fact that so many things that are online, in videos, let alone the games, are violent has me worried.  Yes, my children, and probably yours as well, know the difference between reality and fiction.  Nonetheless, the more they are desensitized the easier it is for them to react in an aggressive manner when they have to use instinct.

Overall, children as well as adults are using media as a distraction for things that are lacking – or what our children perceive to be lacking.  So instead of creating a productive, happy life our children are creating a life of overwhelming solitude where they won’t really know how to reach their full potential.  What are you going to do to help your children learn that they are wonderful people with a lot to give the world.  People that don’t need to rely on constant media to find fulfillment but rather to find it within themselves.